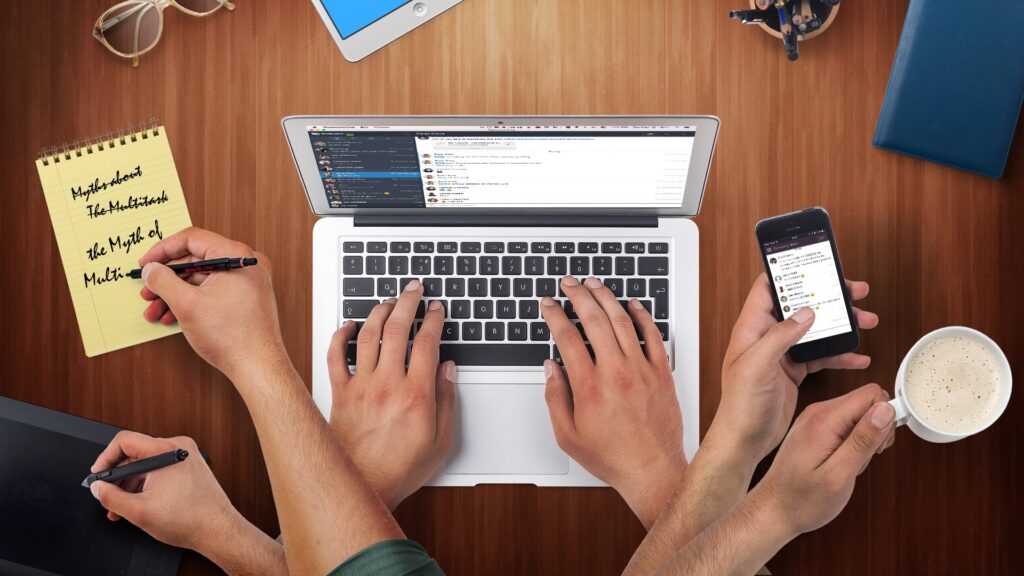 The „multitasking“ topic has been attracting my attention for some time. I believe the reason for this is more stress level as I continue to multi-task without paying enough attention to the brain that tries to cope with it. As we age, researchers say, we have a harder time getting back on track after even a brief detour. Hence my answer and advice, to myself first.

There are number of reasons why most of us should not do more things at the time, at least not often. Today a number of studies and researches have been done that lead to pointing at the negative sides of that „discipline“. In our common understanding the multitasking is attached to women due to their numerous activities and duties that would not be completed as expected if multitasking is not applied. Cooking, talking to a child or other family member, making a shopping list, reflecting on the day’s past as well as coming activities…Difficult to stay stress free this way, isn’t it? However, this is just one aspect of multitasking.

Today we know that 98% of the population doesn’t multitask very well. What we really do is shifting back and forth from one task to another, such as typing an email and then listening to that conference call conversation, then back to our email and so on.

We are actually aggravating the efficiency when we try to multitask because, each time we do it, it takes our brain some time to refocus. So while it might seem efficient on the surface, it isn’t – studies show that multitasking can reduce productivity by as much as 40%.

Still, we all do it: texting while walking, sending emails during meetings, chatting on the phone while cooking dinner. In today’s society, doing just one thing at a time seems luxurious, even wasteful.
Contrary to popular belief, multitasking doesn’t save time. In fact, it will probably take you longer to finish two projects when you’re jumping back and forth than it would to finish each one separately.

Some researchers also looked into the heart rate in people who have access to a constant stream of emails and those without. They found that those who received a steady stream of messages stayed in a perpetual “high alert” mode with higher heart rates. Those without constant email access did less multitasking and were less stressed because of it.

It makes sense that if you try to do two things at once—read a book and watch television, for example—that you’re going to miss important details of one or both. But even interrupting one task to suddenly focus on another can be enough to disrupt short term memory, according to a study.

And what about our relationships and multitasking? This seems to be an area where multitasking has a much bigger effect than most people realize. For example, a couple is having a serious talk and the wife says ‘Oh, let me just check this message.’ You can imagine the most likely husband’s reaction. He gets upset and then he decides to check his messages which leads to communication just shutting down. One recent study from the University of Essex even shows that just having a cell phone nearby during personal conversations—even if neither of you are using it—can cause friction and trust issues. It would be a nice gesture to pay full attention to a person we are talking to and would certainly make a big difference.

Further on, being distracted during meal time can prevent your brain from fully processing what you have eaten. Because of that, you will not feel as full, and may be tempted to keep eating—and to eat again a short time later. Experts recommend that even people who eat alone should refrain from turning on the television while eating, and to pay attention to their food truly.

Texting or talking on a cell phone, even with a hands-free device, is as dangerous as driving drunk—yet that doesn’t stop many adults from doing it. It is not just driving that puts you at risk for the consequences of multitasking, either. In one study, one in five teenagers who went to the emergency room after being hit by a car admitted they were using a smartphone at the time of the accident.

There are many more examples that we should be reminded of in order to start thinking twice before we set into doing several things at the same time – which multitasking is.