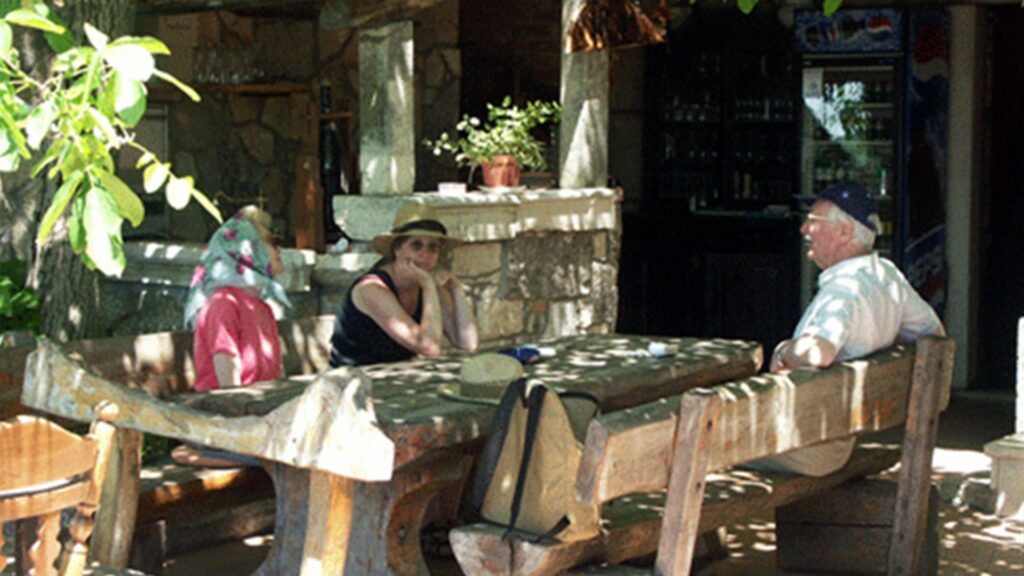 You may be coming to Istria or Kvarner for medical treatment, but while you’re here what could be more therapeutic than some relaxing sightseeing in this beautiful part of the world.

But what to see? I’m a Brit who’s been living in Istria for many years and, for me, Istria’s gems are its beautiful, old towns and villages. While some of the larger and better known places, like Rovinj, Motovun and Groznjan, are regular stops on the tourist trail, many others have yet to be discovered. Amazingly, even in the height of summer, you can often have these places almost to yourself – apart from sunbathing cats!  One of my favourites is tiny Tinjan, a short drive in-land from the Istrian coastal resort town of Porec.

Just off the Porec-Pazin main road lies the cute, little village of Tinjan which has a strange electoral history. Elders would sit round a stone table with their beards spread in front: a flea was released in the middle and, whoever’s beard the flea jumped into, was elected mayor for the year.

Centuries later, the Županski stol – Table of the Mayors – is still a tourist attraction and you’ll regularly see visitors sitting around it, ‘spreading their beards’ in front of them. Why not have a go? Even if you don’t get elected – and let’s face it, you probably hope the fleas are nowhere to be found – it’s a great place to enjoy the view over the dramatic Draga valley. (In case you wonder, the road in the valley goes to Sv. Petar u Šumi (St. Peter’s in the Woods)).

Also in the little square is a statue on a pedestal: he’s St. John Nepomucene, protector of bridges and travellers, a useful saint to know when you’re on holiday.

Dominated by its church of St. Simon and St. Jude Thaddeus (built in 1773), Tinjan’s a charming little village to explore. Just don’t wear high heels, or its cobblestones will send you flying. A few interesting features to look for in your loop round are an archway with a date inscribed of 1442 (near the base); a tiny house shoehorned next to the church bell tower; the window set into a huge chimney (recently restored); a grand pink house with an attractive arched terrace and the stone head perched precariously above a gateway.

Tinjan’s rarely busy, so you can usually park next to the war memorial in the square, opposite Konoba Djidji and the Županski stol.

After your exploration, why not follow our footsteps into Konoba Djidji for a drink or maybe lunch. It was a lovely day when we visited, so we sat in their garden and admired the view over the valley.

So come, relax, stroll in the sunshine and soak up the history – just being here will make you feel better.

Close-by are the villages of Kringa and Sv. Petar u Šumi and it’s a pleasant looped drive from Tinjan through the Draga valley to Sv. Petar, onto Kringa and then back to Tinjan. You emerge on the main road next to a pizzeria and restaurant, Na Kapeli. I’ve never been, but I’ve heard the food’s supposed to be good.

Kringa (also part of the municipality of Tinjan) is home to the vampire legend. Allegedly, the first vampire ever mentioned in literature (in 1689) Jure Grando, came from Kringa. Supposedly, when you walk round the village, you can still see several large crosses erected between the houses as vampire protection. I had a good look but couldn’t see any, but it does have rather a lot of chapels for a village of its size. It also has a magnificent tower onto its cemetery and several lovely old buildings. Today the village’s main attraction is its Vampire Bar, but don’t get too excited as it’s just a bar with a vampire theme.

Just across the Draga valley from Tinjan,  Sv. Petar u Šumi is another somewhat-famous small village – this time with a monastery (maybe they needed it with vampires so close at hand). It’s an attractive drive across the valley, but apart from the monastery the village has little else to offer. When we went the monastery was closed, but friends who have been when it’s open say its cloister is gorgeous. It’s just pot luck if it’s open or not.