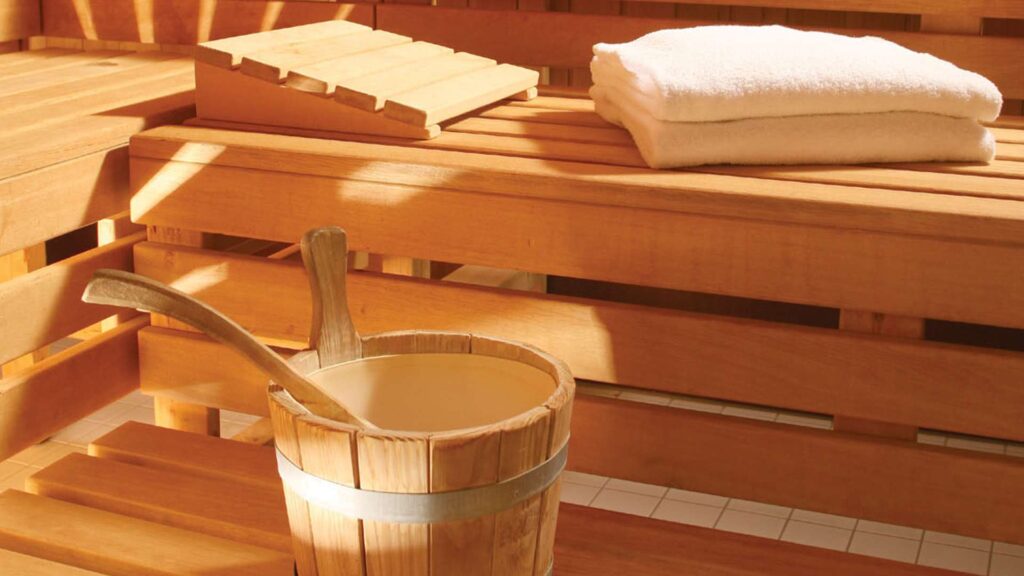 The word sauna comes from an ancient Finnish name for bath and bathhouse. It was originally borrowed from the early Proto-Germanic *stakna- whose descendants include English stack. However, it doesn’t necessarily mean a building or space built for bathing. It can also mean a small cabin or cottage, such as a cabin for a fisherman.

People from Mediterranean didn’t have a habit of going to sauna. Their bodies and hearts have almost constant stream of sun and light, warm winds, pleasant sea and delicious food and drinks.

Still, the idea of using sauna has become so widely spread that many people around the world have embraced sauna because they understand its beneficial effects on body and mind.

I will share with you my (not only personal) findings about the benefits sauna offers, but you probably know more…

In a study published online by JAMA Internal Medicine (http://jamanetwork.com/journals/jama) people who sat in a sauna at least once a week lowered their risk of dying from any cause by 22 percent, while those who sweated it out at least four times a week lowered their risk by two-thirds. If that sounds like a lot of sauna-sitting, note that the study was done in Finland, where the practice is very popular.

Depression is the most common mental illness, yet there is still no “cure” for it. However, science is discovering many things that help ameliorate the symptoms of sadness, hopelessness, exhaustion, and apathy. And now you can add sauna bathing to that list. Patients with mild to moderate depression experienced significant improvement after sitting in a sauna for 15 minutes a day, 5 days a week, according to a study published in Psychosomatic Medicine (http://journals.lww.com/psychosomaticmedicine/pages/default.aspx.)

One of the reasons saunas are so good for you is because the heat—between 70 and 90 degrees Celsius on average—may help strengthen the heart, improve circulation, and therefore reduce the risk of heart attacks and strokes as well as heart disease, according to the JAMA study. The sense of well-being and relaxation experienced during sauna bathing may also play a role in helping your heart, the researchers added.

Sitting in a sauna may feel like a good way to zone out or be alone with your thoughts, but it turns out that it’s even better for your mind than simple relaxation. People who indulged in a sauna session at least four times a week were two-thirds less likely to be diagnosed with dementia later in life, according to a study. The scientists speculated that the memory boost might be linked to the documented improvement in heart health from regular sauna bathing, meaning that a stronger heart leads to a sharper mind.

One of the best benefits of sitting in a hot sauna is how it chills you out—it’s too warm to do much of anything but sit and think or have a quiet conversation. And with no cell phones, computers, or gadgets to distract you, those 5 to 20 minutes (it’s not recommended that you linger longer than that) are all yours. Even better, these feelings of relaxation and well-being last after you leave the sweat box, helping you feel calmer all day.

Eat too little? Eat too much? Saunas may help regulate your appetite, according to the study in Psychosomatic Medicine. While the researchers were studying the effects of saunas on depression, they noticed an unexpected bonus: Patients’ levels of ghrelin, a hormone associated with a healthy appetite, came into normal ranges during the sauna therapy.

Hot packs have long been used to help relieve pain from muscle overuse and injuries, but could heat similarly help relieve more generalized pain? Scientists answered this question by taking 46 patients in a hospital who expressed being in significant pain and dividing them into two groups. Both groups were taught mental exercises to deal with the pain but the second group was also asked to sit in a sauna daily. After a month, both groups showed improvement in pain, but the sauna group experienced greater relief and, as an extra bonus, also reported much less anger about their situation.

So, when you come to visit us on the warm Adriatic you can enjoy sauna, too. It has gradually become very popular and unavoidable part of hotels’ offer as well as in some rehabilitation centres. We are confident that, besides spending your time in sauna, you would not mind relaxing while taking pleasant walks under the sun.